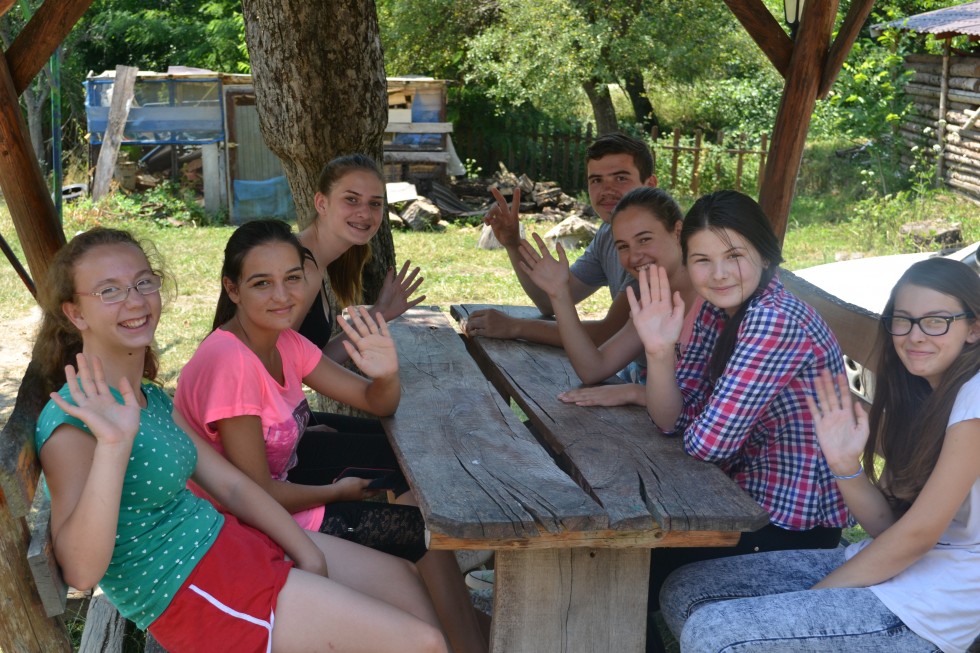 What is 4D up to these days? What is new and what has changed? All questions you may have – understandably, especially after a year in which so much ministry has happened. So, I will try to respond and give you a more complete picture before I share about Oana, Rut and Ana.

In short, 4D is all about helping churches in Eastern Europe to be missional.

Not making them appreciative spectators, but helping them to respond to God’s call to be a light in the world! His light!

So, what does that mean? And how does 4D fit into all of this?

Our biggest program in 2015 – Ambassadors Together – is a good example. It grew 50 percent in just one year! It started a few years ago when Emma, a student in Cluj, Romania, asked her leader, “Rei, for years we’ve been blessed by Americans coming to help us. Now, it’s our turn. Can we?”

Rei, who is 4D’s national director in Romania, responded, “I was thrilled to see my students move from a receiving mentality to a giving mindset.” Within Rei’s church-based student group of 400, several teams were formed and last year, other churches asked to be part of the program as well. This year, Ambassadors Together grew from 10 to 15 teams, 165 volunteer leaders, reaching 1,500 kids for Christ. In doing so, the teams had to raise over 50 percent of the cost from their own friends and sending churches. They then worked alongside a church-planter, often during several visits and on a year-long basis.

The impact was enormous for all target groups including 1) the church-planters, 2) the kids (and their families), 3) the students who received hands-on training in “giving mode” as Emma put it, but also 4) entire churches and communities supporting “their own” mission efforts and seeing God use them to bring His light across their country and beyond (often also across ethnic barriers, like the Roma/gypsy people). And, as you helped them with your gifts and prayers, we all were used as God’s Ambassadors together. Exciting, isn’t it?

In addition, much has happened in neighboring Moldova as well. And our dream for 2016? We are praying that God will allow us to help grow His movement with an additional 33%. That means 20 high-impact churches becoming more missional, 200 future leaders equipped, church planters encouraged and assisted, and over 2,000 kids hearing the Good News through this one program in Romania alone.

But that’s not all. We also are excited about the use of the Internet as a tool to reach out to people searching for answers. In Czech Republic, which is one of the world’s most non-religious or atheistic countries, the response rate more than doubled within just one year! This past October, the Czech Jesus.net site had:

6704 visitors on the KnowingGod Czech site,

160 who indicated a decision for Christ.

And again, all of this is just what happened within one month!

A new program called “My Story” received 511 visits and 3,065 stories (Czech testimonies) were viewed. All this (KnowingGod and MyStory) on a $60,000 budget with one full-time coordinator, several part-time staff, and a network of 20 volunteer e-coaches who respond to questions and requests for help, each within their own geographical area. As a result, relationships and trust are being built, allowing for personal visits and small study groups as follow up.

Tools for ministry: LeaderXpress is a 4D website in the Czech and Romanian languages for youth workers (most of whom are volunteers), where they can find resources in their own language. It also is a platform to share “best practices,” ideas, and network with others. Czech books and DVD’s are produced in close partnership with the country’s largest Christian publisher, with two thirds of the books sold in secular book shops. Revenues are used for future productions, making any initial investment go a very long way in reaching out to un-churched Czechs.

A growing area of involvement for 4D has been: church-planting and church-revitalization (helping existing churches to become more missional). Imagine the spiritual impact of 100 or even 1,000 local churches becoming more outreach-oriented and giving them tools to work with?! It’s both strategic and Biblical, with nothing that compares.

Other ways in which we help churches to be missional include: outreach to addicts (recovery and integration in their community) and immigrants (mostly in Serbia where Syrian immigrants transit).

Much of my personal involvement is mentoring local Christian leaders and helping them to increase their ministry and effectiveness.

But now, we get to hear Oana’s story, who attended one of fifteen 4D-sponsored camps in Moldova.

Oana, who became a follower of Christ at camp this August, writes, “During my stay in camp, I understood that I need God and I should accept Him into my heart. I came to a repentance, I asked forgiveness from God, I accepted Jesus into my heart. Praise the Lord! And now I want to do the next step – to be baptized.”

Rut, who attended a 4D-sponsored camp in Romania, says: “This camp is the place where I made new friendships, found the answers to my questions, and discovered God.”

Ana, who is also from Romania, shared, “I made ​​new friends, but above all, I understood the power of God. This camp is where we received comfort and encouragement. In this camp, I understood that I must be ready. I learned that every moment counts and every second should be lived for God.”

The list of changed lives goes on and on. It’s God’s amazing grace at work! But also a result of God using friends like you, who in partnership, made it possible for Oana, Rut, and Ana to go to camp this year. And next year?

So, I write this letter to you with both enormous thankfulness, but also with a request to continue your partnership in equipping national workers and their churches to reach out as “light bearers” and bringers of God’s Good News.

Together in our Master’s service,

Click here to donate online today and become part of equipping national workers and their churches to reach out with the love of Christ to those around them.