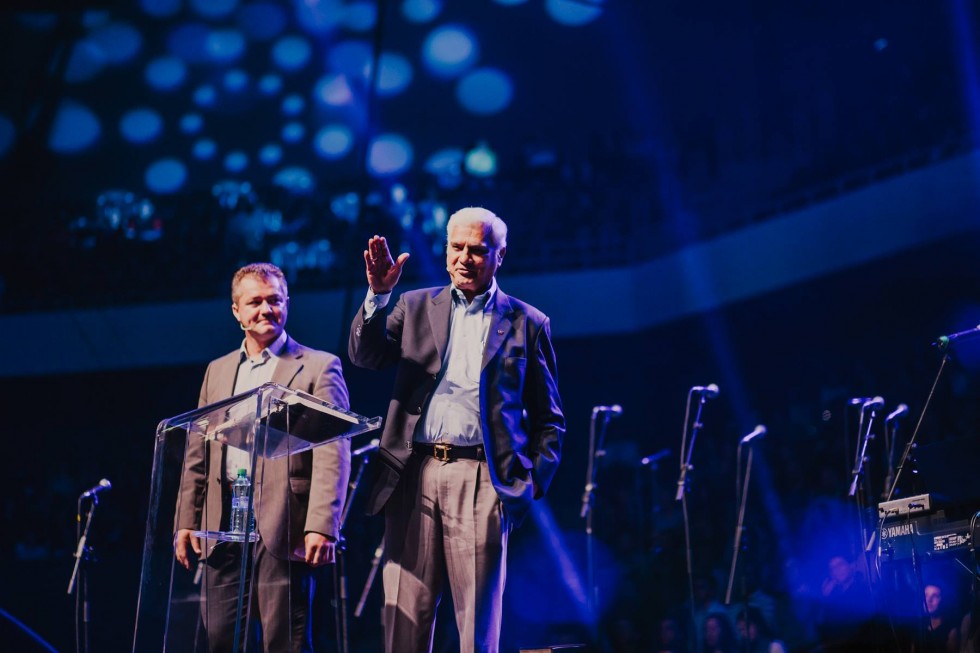 We believe – highlight of the year for Cluj, Romania

A big thank you to all of you that prayed for us and supported this event! Believe is now part of our community history in Cluj-Napoca, a milestone in the lives of many people in this country. We had almost 10,000 participants and about 500 dedicated their lives to Christ during the event. Among these, were people from local administration, politicians, university realm, even a group of 5 young drug dealers… Another 46,000 were watching this event live on television and the Internet and many others will watch and distribute the recorded sessions. This incontestably proves that God is still moving and changing lives in this city and in the entire nation.

Months ago, when we started dreaming, we had only a blurred image and many doubts that we would be able to get to a glorious ending. Pastors and leaders from several evangelical churches working together, with different expectations and not much experience in organizing large events, sounded like a bad recipe. Still, God was the secret ingredient that made the connection, breaking personal prides and agendas, bringing acceptance and giving a common vision. There were many battles along the way, but we prevailed without leaving “dead bodies” behind. More than that, we grew stronger, encouraged to continue the hard work, believing in the resurrection of Christian values in a self-sufficient society.

During the two days of the conference, our city was exposed to God’s message through music, preaching, and a great atmosphere among participants. We had the privilege of listening to good music, great bands, and a stunning 1000 people youth choir, gathered from several cities around the country, led by Don Grigg, a charismatic musician and missionary in this field.

The speakers were also very inspired, motivational and powerful in proclaiming a serious truth: we need God in our lives, in our community, city, country… Cristian Barbosu, for example, invited the audience to make a powerful and visual statement by nailing their decision on a cross in front of the stage and in front of thousands of people.

Our honored guest, Ravi Zacharias, the famous Christian apologist, raised things to even a higher level. His humbleness and powerful life experiences were able to remove any barriers that blocked people’s minds to accept the reality of God and His will for each one of us. The Q&A session was another opportunity for him to answer difficult questions and shed some light on very specific issues. “I am a Muslim,“ confessed a woman, “how can I accept Jesus as Son of God when all my life I knew He was just a prophet? I’m in-between Islam and Christianity, so pray for me so I can choose the right way…“

It was a privilege to have Ravi Zacharias in Cluj, a rare occasion. He also had a personal meeting with our mayor and some academics in Cluj. We’ll see what comes out of this. For 4D Ministries, this was an opportunity for a future partnership with his ministry in Romania.

This was a first experience for us at this level, and the feedbacks are still hot. Pictures, videos, and tons of comments are flooding our Facebook page. The response is astonishing. It’s a push forward for us to think ahead.

Believe was not just an event, it has the potential to become a movement, so it’s our responsibility now to capitalize on it and continue what we started.

Many people prayed for Believe and many of them offered their financial support. Hundreds of young people volunteered for days to make things happen. Thank you again for all of you who kept us in your prayers and supported this new beginning.

You really Believe(d) in a revival movement in a Christian country. This is what Romania and Europe needs. We Believe!

More pictures and videos could be found on Believe Facebook Page.